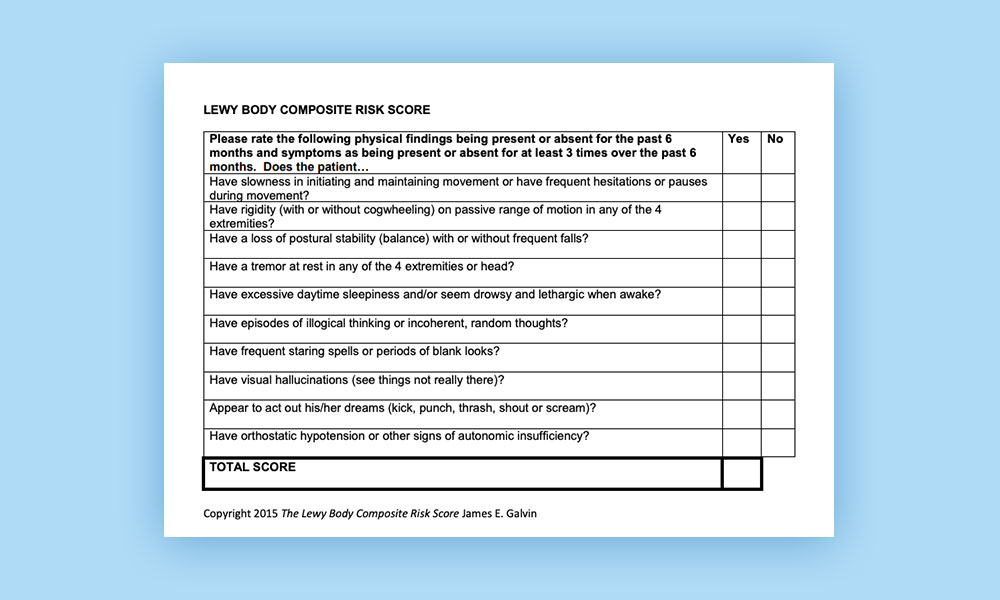 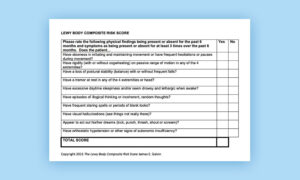 The Lewy body dementias, composed of two related disorders: Dementia with Lewy bodies (DLB) and Parkinson’s disease dementia (PDD) are a challenge to diagnose, particularly outside of expert centers. One of the great challenges in differential diagnosis of neurodegenerative disorders is attributing clinical symptoms to specific pathologies to guide treatment choices and discuss prognosis and clinical course. While PDD provides a potentially easier route to diagnosis because the cognitive disorder begins in face of an established movement disorder and criteria have defined a mild cognitive impairment (MCI) state, DLB is a more difficult entity to diagnose with delays in diagnosis approaching 18 months leading to significant burden to patients and caregivers. Patients with DLB are often misdiagnosed. While consensus criteria for DLB have excellent specificity (79-100%), there is no standardized way to assess or operationalize many of the cognitive and behavioral symptoms which markedly decreases sensitivity in clinical practice (range 12-88%). We developed the Lewy Body Composite Risk Score (LBCRS) to improve the ability to detect DLB and PDD in clinic and research populations and increase the likelihood of determining whether Lewy bodies are contributing pathology to the cognitive diagnosis. The LBCRS was derived from clinical features in autopsy-verified cases of healthy controls, Alzheimer’s disease (AD), DLB, and PD with and without dementia. The LBCRS was tested in a consecutive series of 256 patients compared with the Clinical Dementia Rating and gold standard measures of cognition, motor symptoms, function, and behavior. The LBCRS increases diagnostic probability that Lewy body pathology is contributing to the dementia syndrome and should improve clinical detection and enrollment for clinical trials.